“Save the date, off the market” – Kalybos and Ahoufe Patri getting ready to get married 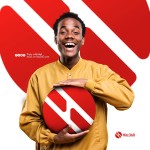 Kalybos and Ahoufe Patri came into the limelight after their popular comic series started streaming on various platforms.

The two were very close that it was speculated that they had something to do more than friendship.

In series of interviews, Ahoufe Patri has denied having an affair with Kalybos. According to her, they are friends and she sees Kalyboss as her brother. According to Ahuofe Patri, she would love to be Kalybos’ ‘best man when he is ready to get married. She also emphasized that although she liked him, he has never made a move on him.

ALSO CHECK OUT:  Mzbel Flaunts Her Raw Goodies As She Prays For John Mahama’s Return [Watch]

However, in a recent post, Ahoufe Patri and Kalyboss have shared a save the date image on their page, perhaps trying to announce their marriage for tomorrow, June 10th, 2021.

Kalybos captioned his post, “Love is a beautiful thing….. FINALLY, I’m off the market. Sorry Ladies …”.

Some social media users have expressed shock as many are of the opinion that it might be a prank. Others have also congratulated them on their “supposed” marriage.

See their posts below;